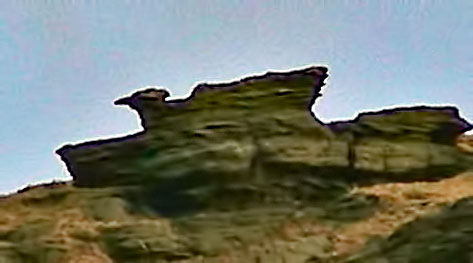 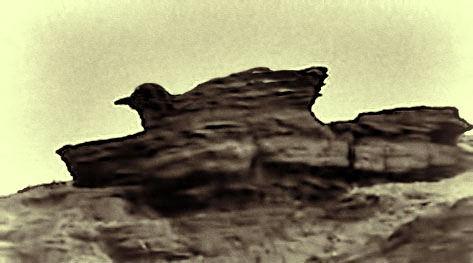 Perhaps this is what it looked like before many centuries of erosion and damage scoured the fragile gritstone rock. The original  Dove Stone as it might have been when first named hundreds of years ago.

Despite other theories, I believe the area is almost certainly named after a prominent rock as shown in the illustrations. The first reference I can find to the name of Dove Stone is in the Thomas Jeffries map of 1771 where there is a record of Dove Stone Moss but no mention or portrayal of a rock. First definitive mark of the actual Dove Stone on a map is in Henry Teesdale’s Map of Yorkshire 1828 but the position is not correct. It is marked correctly on the Enclosure Map of Saddleworth 1840 where it shows the Dove Stone as being between Charnel Rocks and Fox Stone. See the relevant section of this map under the LOCAL MAPS tag. I doubt if it appeared as it does today when they made the maps centuries ago, otherwise, they might indeed have named it as Duck Stone.

What’s in a Name?

The region is often referred to or spelt as;  Dove Stone, Dovestone, Dovestones, Chew Valley, Ashway Gap, Indian’s Head, Greenfield Valley etc. Since 2010, the RSPB took over management of the land owned by United Utilities and renamed it is as RSPB Dove Stone Nature Reserve.  It is also occasionally referred to as Dove Stone Country Park – which it definitely is not. For many local or regular visitors it will always be known as just plain ‘Dovvies’ – so take your pick. At the Peak District National Park, Head Office in Bakewell, Derbyshire, Dove Stone is more likely to be known affectionately as Outer Mongolia.

On this website, I mainly use ‘Dove Stone’ as a generic name for the whole website to remain consistent although I realise that the most popular spellings are Dovestone or Dovestones, and for search engine purposes I will also include these spellings at times. I also refer to surrounding land not owned by United Utilities and thus not part of a nature reserve.