Following the completion of the Chew Reservoir, a Reservoir Keeper was employed to look after it amongst other things and live in the new house which was built just below the reservoir. The first keeper was a William Wright Robinson (37) who moved there in 1914 with his wife, Annie (34), and sons, Ernest (15), and William (11). William Robinson (the elder) lived there until his death at the house in 1954.

Chew Reservoir – Reservoir Keeper’s house and Nowell’s cabin at the rear, named after the Clerk of Works, Mr Nowell during construction

To live in such solitude together with extremely bad weather at times must have taken remarkable resolve. But although isolated the area was popular so there were quite a lot of walkers and climbers making their way up to the place at times where they were served tea by Annie. The real problem though was getting supplies to the house up the steep and rough track (now Chew Road). William Robinson, better known as Billy, was supplied with a donkey (with panniers) which was housed in one of the outhouses but allowed to wander freely. It survived until 1917 when it was found dead at the bottom of a ravine (a place which is now known as the Donkey Drop). The two boys walked there and back to school in Greenfield.

The donkey was replaced by a bigger and stronger pony which could pull a trap from the bottom of Chew Road. Later, after Billy’s son purchased a motorcycle the Joint Waterworks Committee provided him with a sidecar and the pony was replaced. A telephone was installed in the house in 1938. In bad weather, in winter the house was sometimes isolated for lengthy periods. During the severe winter of 1946/1947, it was cut off for eight weeks.

Until the 1940s, coal was tipped near Chew Piece at the brook, after that time it was brought up by a lorry. Groceries and meat were purchased from Greenfield and milk from Greenfield Farm. Mail had to be collected from Greenfield Post Office. Occasionally, official visits and meetings with the Joint Committee and Local Authorities were held at Chew and Annie Robison supplied the catering in the dining room which was always kept immaculate. She also catered for the shooting parties during the grouse shooting season. Climbers going to and from Laddow Rocks were allowed to leave their gear and dry their ropes slung between the house and outhouses.

The first car to the top was a small Rover in 1924. In it were a Colonel Broadbent and Mr Lingard, both of whom had the shooting rights on the surrounding moors. 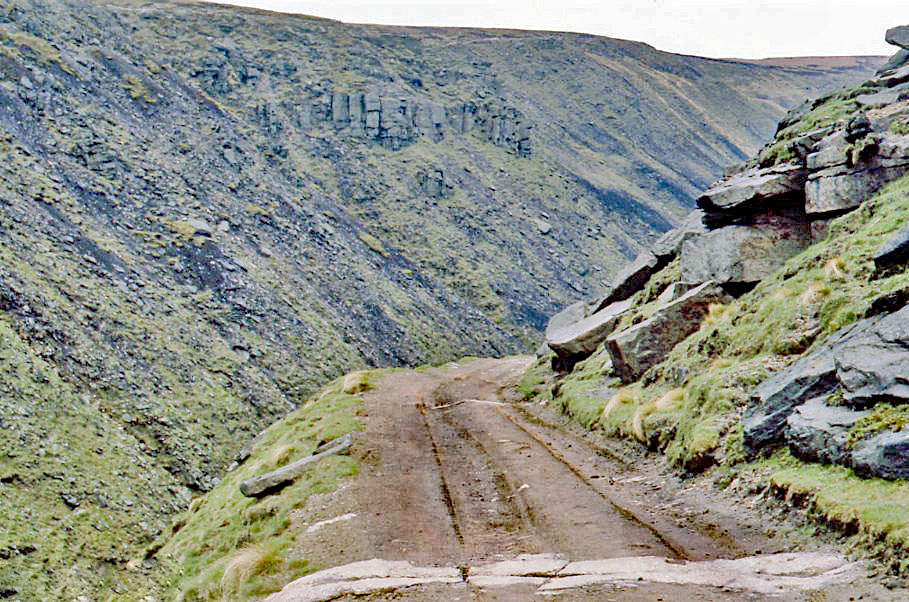 The Donkey Drop – used to be quite an exciting downhill drive at this point when the road was wet, churned up with mud and the Land Rover wheels sliding about. 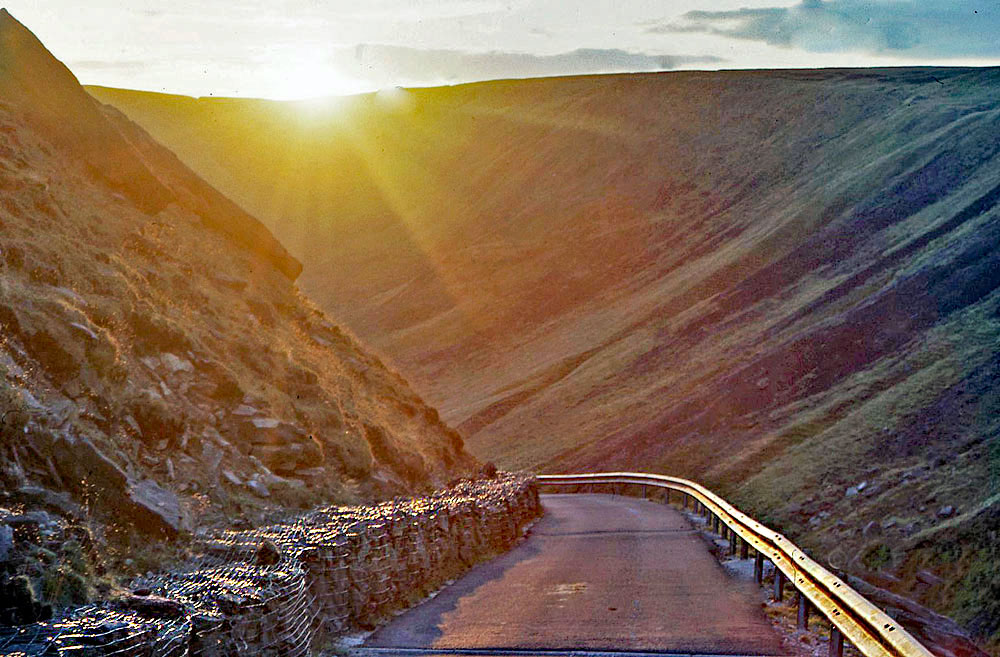 After William died and Annie moved out, the house was empty for some time until a new keeper, George Walton was appointed. He stayed until 1961/62 when the next keeper, Joe Mumford, a keen hiker, took over. He had a Land Rover which was fine but no use when heavy snow fell. His mother-in-law went up for Christmas in 1962 but could get out again until February 1963.

When it was no longer necessary to have a reservoir keeper stationed at Chew the house was left empty and became vandalised. It was demolished in 1969, Nowell’s Cabin had been burnt down sometime before.

This plantation of mixed deciduous woodland is the only remaining woodland at Dovestones from over a hundred years ago. All other deciduous plantations have been planted during the last 30 years (some Life for a Life)  and many of the coniferous plantations much longer. The bottom of Chew Piece, an area of about 40 acres, was used as a Scout site for camping and activities.  A lease had been granted to the Boy Scout movement in November 1942 but because of the War, the site was delayed. Initially, a wooden ex-Army building was erected. This was later replaced by a stone building which was officially opened by the Deputy Chief Scout, Sir Rob Lockhart on the 16th May 1954. When Dove Stone reservoir was being constructed the access road was badly churned up and the building suffered severe vandalism. In 1969, the Water Board wouldn’t renew the lease unless a sewer and a mains water supply were laid as far as the sailing club, this was not viable and also by then, the hut had been almost demolished by vandals with much of the stone being stolen. The Lease was not renewed and around 1970 the Water Board cleared the site of the remaining stone. 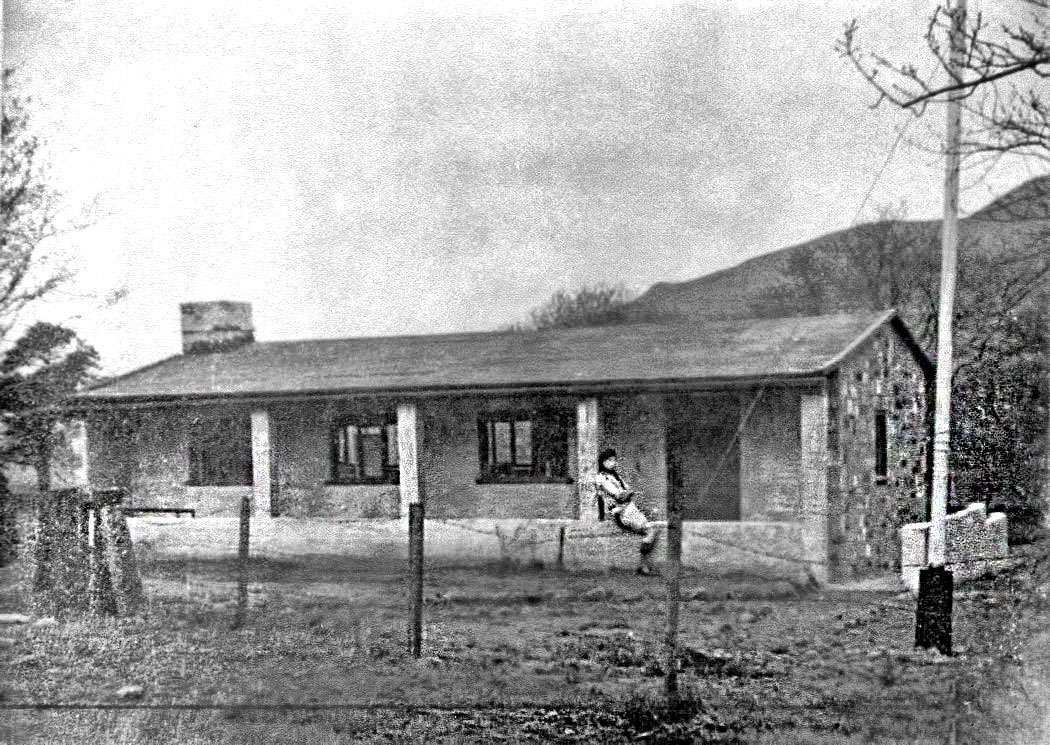 The Scout Hut and flagpole – kind permission of Kevin Lawton 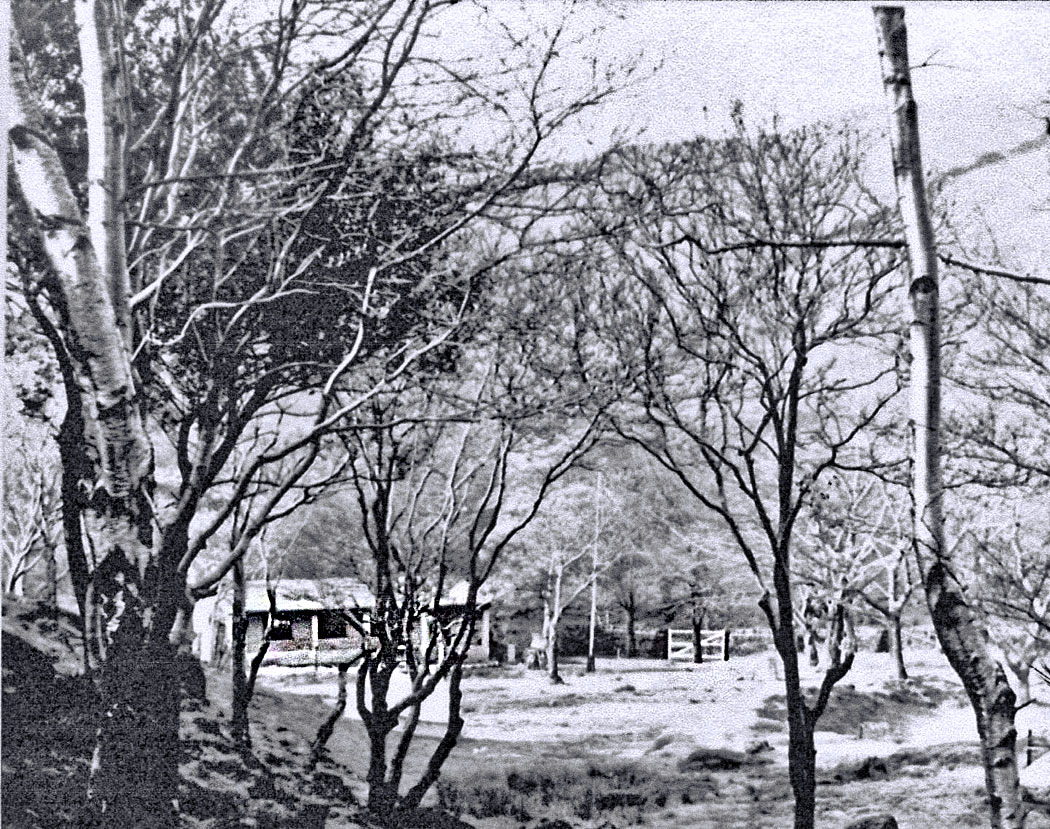 THE WAR YEARS & the ARMY 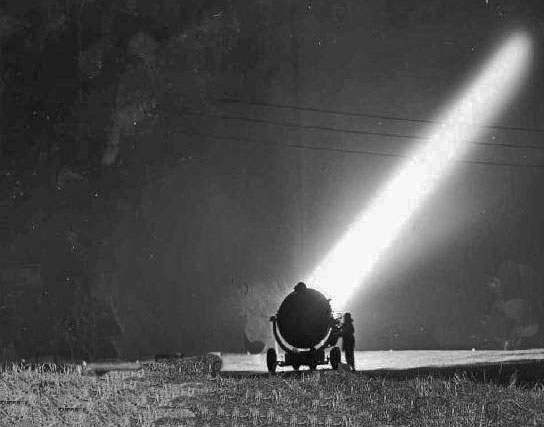 Searchlight (not at Chew)

In November 1987,  I received a letter from Mr A E Harrison who wanted to share his memories of being stationed at Chew during World War 2. Eddie was stationed at Chew Reservoir in 1939/1940  as a member of a Search Light Detachment of 10 to 12 men. They were first instructed to fill sandbags for a gun pit for the Lewis Machine Gun, the searchlight projector, and generator. Eddie recalled that there was no sand on the site so the bags were filled with peat but they discovered that a .303 rifle round would go right through both sides of the ‘peat’ bag – which ‘cheered them up no end’.

They used an Army utility vehicle for going up and down the track but that broke down one day and five of them had to carry supplies to Chew. Eddie said they had to sleep full-clothed which was often saturated with the drizzle from the ubiquitous mists that swirl around Chew.

Their job was to illuminate the Luftwaffe ready for their ack-ack gunners sited further back. As the Luftwaffe never arrived at Chew during that period they were eventually moved to Liverpool for the Blitz.