There are scores of aircraft crash sites in and near to the  Peak District National Park boundary and there is a mass of information on the Internet with several books published about these crashes.  In the Dovestones area, there are four confirmed crash sites with other sites just off the map close by. There are few or no remains of the aircraft at these four crash sites. Anybody intending to visit these sites should check the detailed information available in various books and websites. In each case, I have given a summary of what happened but if you are interested it is well worth reading the full stories of these incidents which are most interesting. 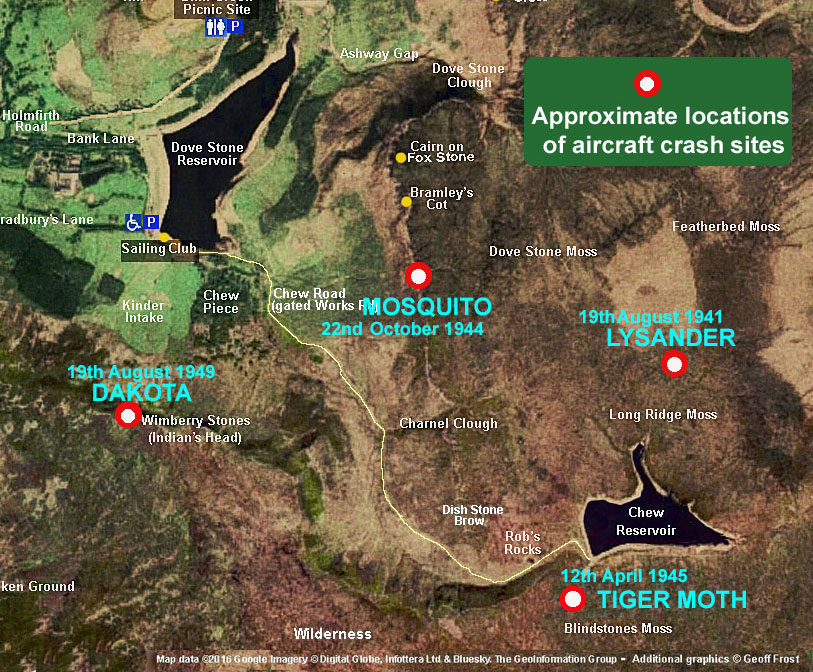 The most notable event at Dove Stone was on the  19th August 1949 when a BEA Dakota G-AHCY crashed on Wimberry Stones Brow (near Indian’s Head). It was on its final approach to Ringway (now known as Manchester Airport)  having flown from Belfast. The pilot, Captain Pinkerton, was flying with 2 other crew members and 29 passengers.

Due to a navigational error, they descended at the wrong point through the cloud and crashed. 21 passengers and all 3 crew members were killed but there were 8 survivors. Two farmers working below rushed up the steep incline to the crash scene and managed to pull some survivors from the wreckage. They were joined by local people including workers from Greenfield Mill. The eight survivors were carried down on stretchers to ambulances waiting at Greenfield. The dead were removed last and taken to Uppermill Mortuary. 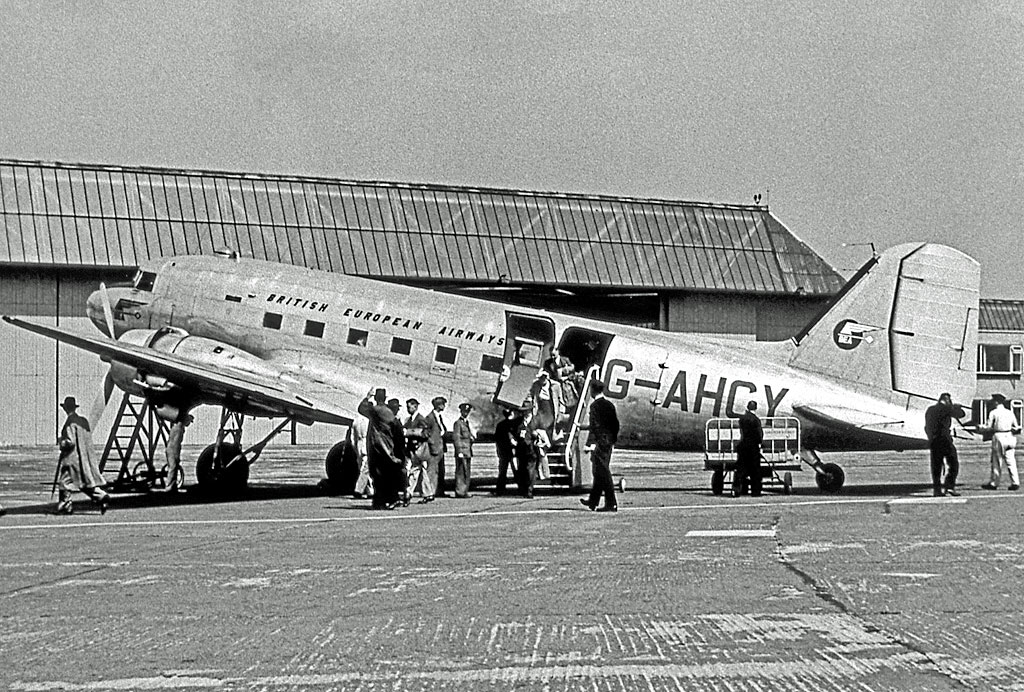 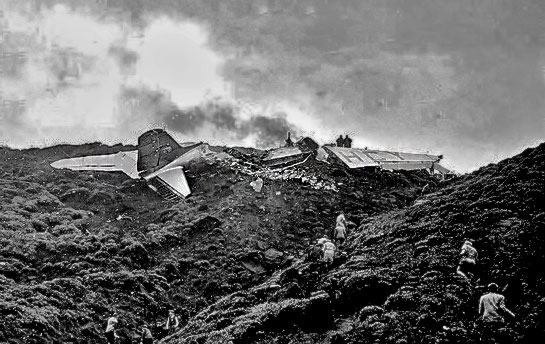 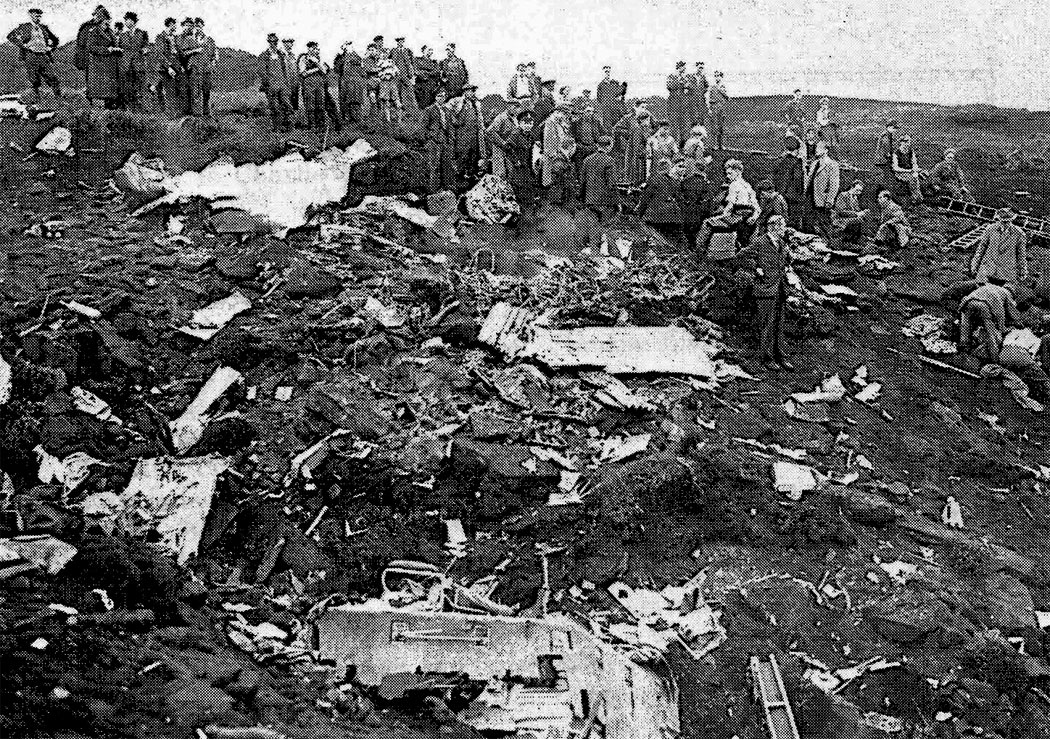 Press photo of the crash scene 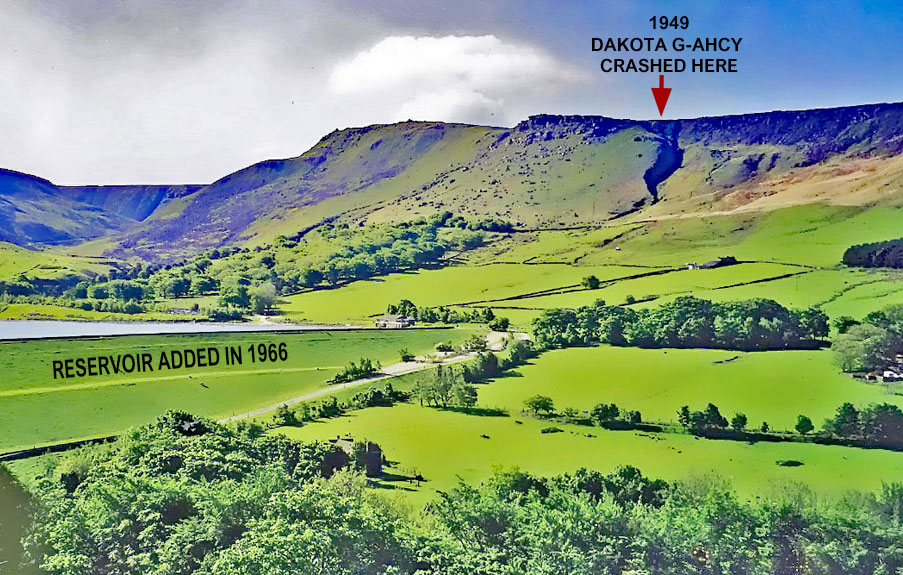 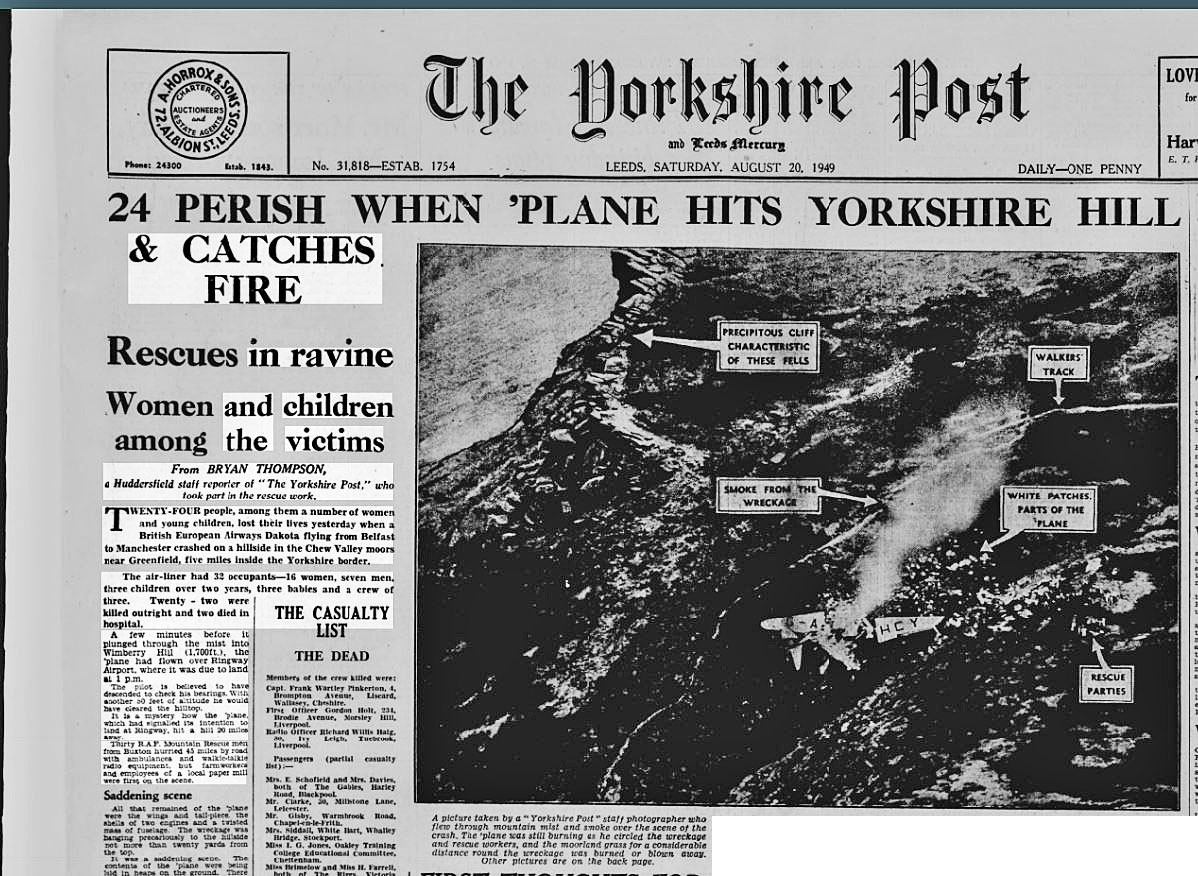 After schooling and flying with an instructor the preliminary flying section of the RAF training course at the Elementary Flying Training School  was to fly a Tiger Moth solo. Afterwards the pilot could go onto other skills such as looping the loop etc.

Leading Aircraftman, Sergeant Michael O’Connell of the Royal New Zealand Airforce was on such a training journey and flying by reading the ground and his rudimentary instruments when he ran into cloud near Chew Reservoir and crashed. Flying Orders stated that if pilots encountered cloud they should turn around and found that in this case, Sergeant O’Connell was at fault by disobeying the standing orders. 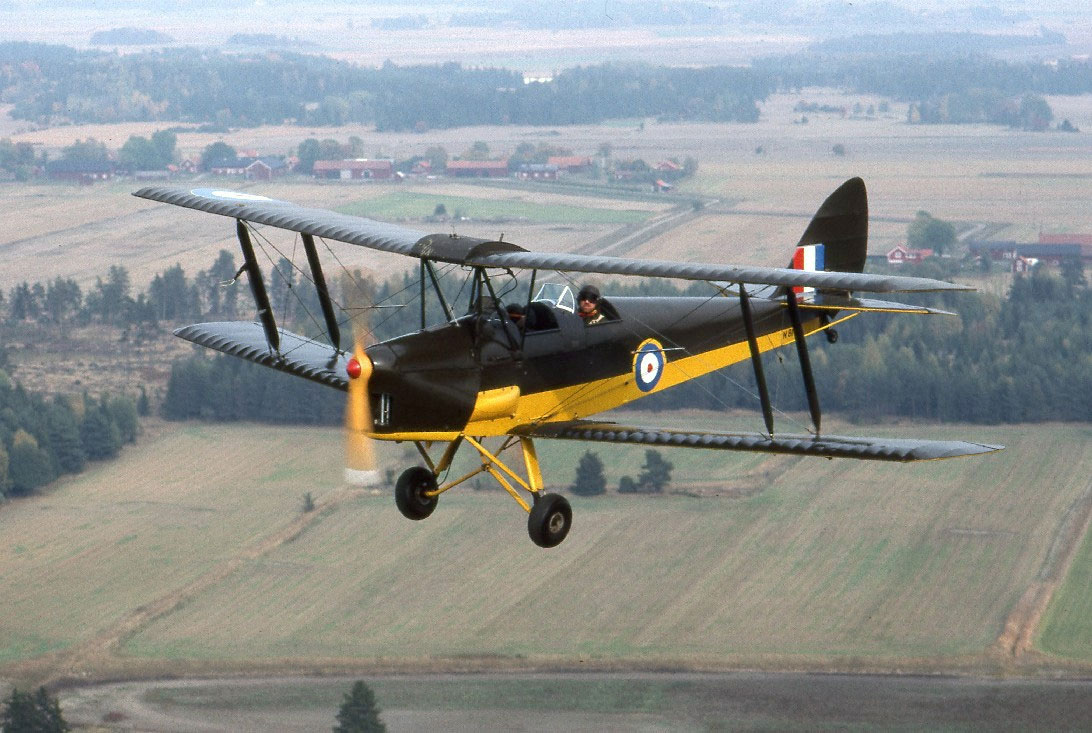 The aircraft was returning from a successful sortie to RAF Oakington  (Cambridgeshire). This 1941, the ‘all-wood’ aircraft was taking part in a Fast Night-Striking Force of No. 571 Squadron of Bomber Command  on a bombing raid target in Hamburg. The Pilot, Flying Officer Ernest Scotland, reported a fault with an over-heating engine which he subsequently shut down. Losing power with only one working engine meant that the aircraft was unable to keep up with the squadron and was alone in the darkness. Then came the failure of the radio-navigational equipment. Flying Officer Scotland and navigator Sergeant Humphrey Soan ‘flying blind’ continued but lost their bearings missing their Cambridgeshire airport by over sixty miles.

They found themselves hopelessly lost over northern England 120 miles away from their base. Probably finding themselves in a sheet of cloud they dipped down to establish a navigational fix. Tragically, their navigational aid showed 1,500 feet when the flew into the rocky slope above Chew Vally where the aircraft burst into fragmented pieces and killing both men. 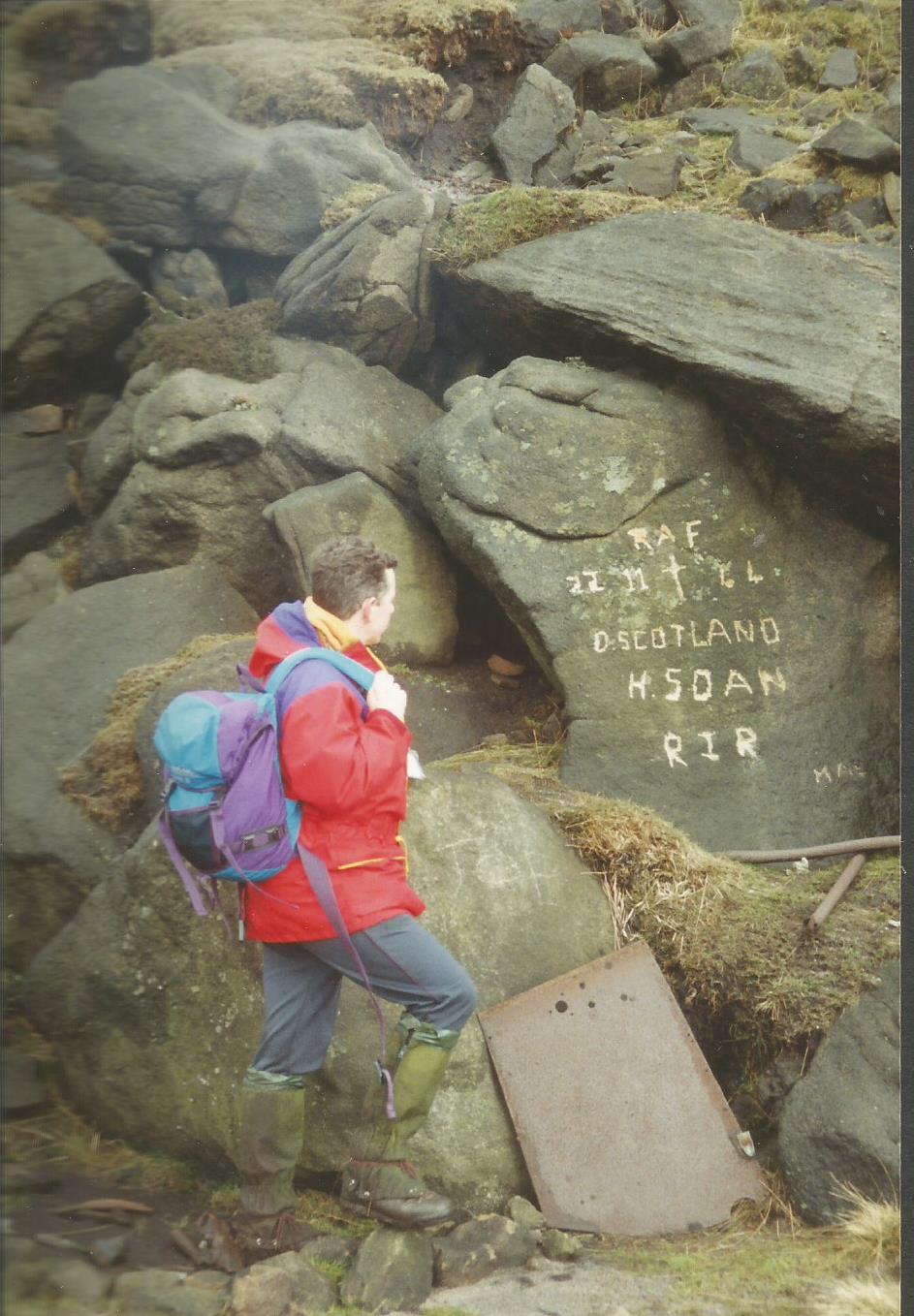 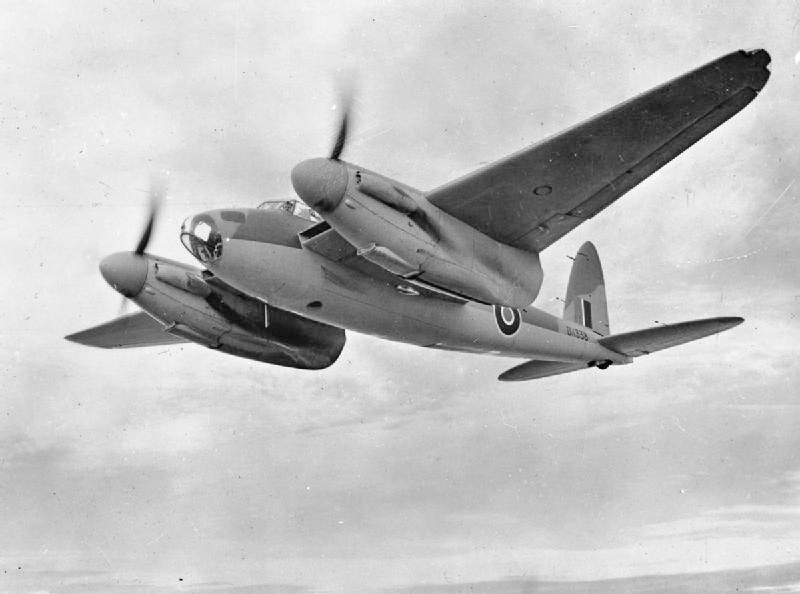 By Photographer: De Havilland photographer for Ministry of Aircraft Production – This is photograph CH 7781 from the collections of the Imperial War Museums.Originally uploaded to EN Wikipedia by Bzuk 18 November 2007., Public Domain, https://commons.wikimedia.org/w/index.php?curid=3132307

In the early hours of the morning, Pilot Officer Frederick Hoddinott and Wireless Operator Leading Aircraftman Alan Chadwick took to the skies to liaise with the guns and searchlights covering the Rhyl sector. They were part of the Anti-Aircraft Co-operation Unit stationed at Ringway, Manchester to provide duties for the training of anti-aircraft guns and searchlight units. Flying on a dog-leg course using his instruments. It was a discrepancy in the instruments, a gyro-compass and, a magnetic compass that caused the aircraft to be off-course and eventually flew into the ground near to Chew Reservoir.

Both men were knocked unconscious in the crash and on awakening found themselves injured. The ground at this point is relatively flat moorland and soft to boggy which probably saved their lives.  Pilot Officer Hoddinott was the least injured with a gash to his head but was able to climb out of the aircraft and looked out across the featureless moor in the hope of being rescued. Wireless Operator Chadwick however, was trapped by his legs. Eventually, they were found by a Water Board worker and rescued. Sadly, Alan Chadwick died from his injuries later which was caused by toxins being released into his body after his legs were freed, known today as ‘crush syndrome’. Pilot Officer Hoddinott survived for many years after the crash. 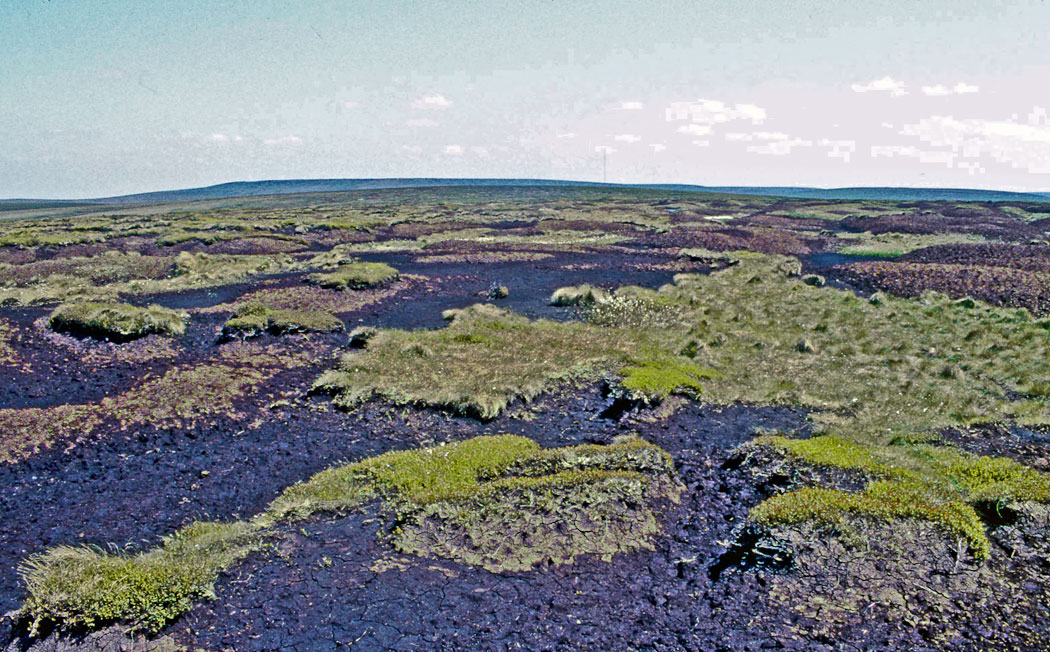 The moor near to where the aircraft crashed 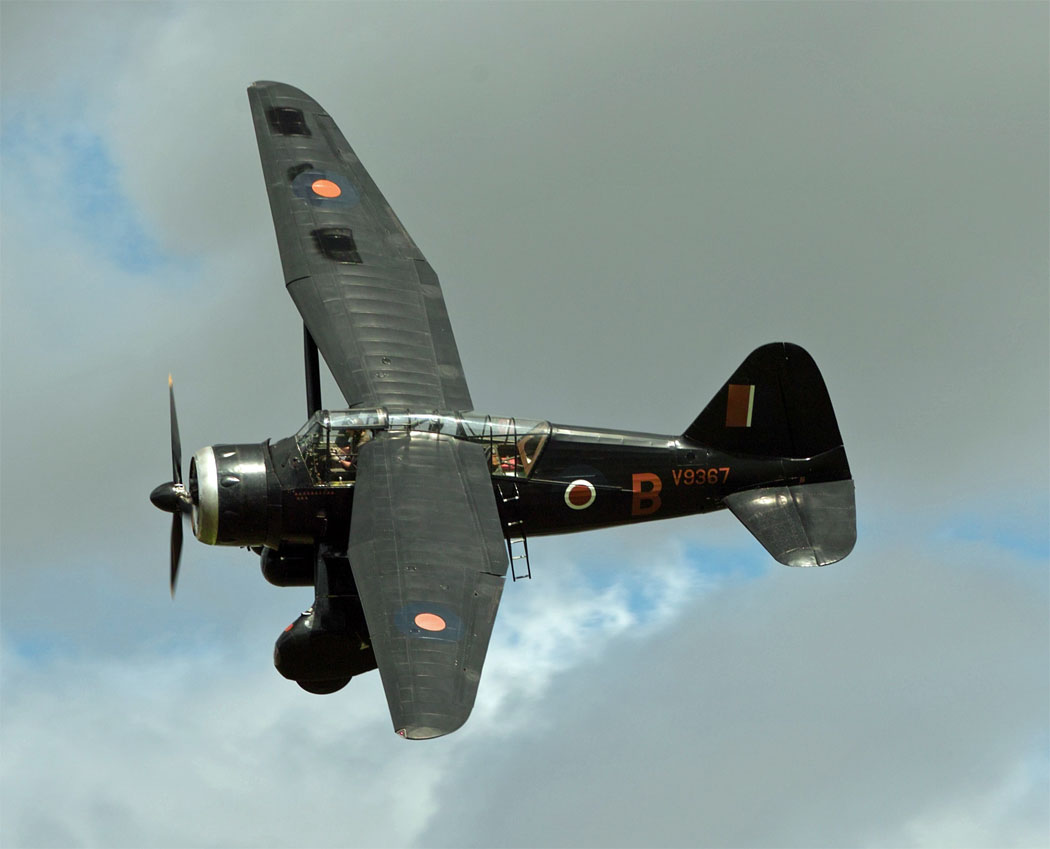