On the 24th June 2018 during the hot, dry, sunny spring/summer, a moorland fire occurred above Wimberry Rocks (Indians Head). Like many moorland fires, it started relatively small but quickly spread to destroy a large area. As it progressed and increased in area and severity, killing vegetation, ground-nesting birds, wildlife fauna and even sheep, it caused vast plumes of smoke which could be seen by passing aircraft and also from a satellite in space. 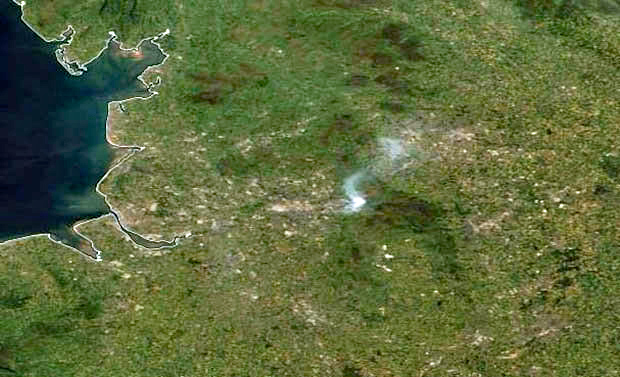 Smoke is seen from a space satellite.  Copyright NASA

The fire soon achieved notoriety throughout the media, not just local newspapers but on the leading television network throughout the country. Even my daughter who lives in Surrey telephoned to inquire whether we were safe from the fire (despite living at Binn Green some distance away). Described, erroneously, as the Fire on Saddleworth Moor it was frequently in the news daily. The fire was in fact, some 3 miles from Saddleworth Moor. There were some relatively small areas of burn around the rim and downwards of the ridge above Dovestone, but the central fire covered a large area of Buckton Moor and across to Ironbower. This moorland is mostly owned by a private company known as Stalybridge Estates. United Utilities also has some small land holdings here as there are other reservoirs, such as Swineshaw in that area

As the fire burned at its most intense the Fire Service from Greater Manchester were supplemented by Fire Services from other areas, and even the Army was called in to assist. More than 100 hundred firefighters and 29 fire engines (pumps) 2 helicopters were used plus a Chinook helicopter on standby. In the village of Carrbrook at the base of the hills, a few residents were evacuated, and the smoke from the fire caused some road closures.

On the 19th of July, the fire was confirmed as being extinguished. It had destroyed about 7 square miles of moorland which might take over a year or more to recover.

Arson is suspected but nobody has been found to be prosecuted.

Moorland fires occur widely almost every year during dry weather for various reasons but most through carelessness or vandalism. During the summer of 1976, which was a similar hot and dry summer, between 26th June and the 30th August, the National Park Ranger Service assisted in extinguishing 82 moorland and woodland fires throughout the National Park, some being large and severe fires.