Throughout the land wherever news is read.
Intelligence of their sad end has spread.
Those now who talk of far-famed Greenfield hills.
Will think of Bill o’ Jack’s and Tom o’ Bills

Often, when somebody mentions the Saddleworth Moors an immediate impression of the (Brady & Hindley) Moors Murders comes to mind. But on Monday the 2nd April 1832, another heinous murder occurred at a pub called The Moor Cock,  or Bill O’ Jacks, which was its popular name. A murder where two men were slain in bloody savagery which is remembered to this day.

The pub was owned by William Bradbury (Bill) aged 84 who lived there with his son Thomas (Tom) aged 46, a gamekeeper who was unpopular and renown for his quick temper. The name Bill O’ Jacks came from William whose father was named Jack, thus he became Bill (the son of) Jacks –  Bill O’ Jacks. Later, for some obscure reason, the pub was also known as Bills O’ Jacks. The pub was situated high above Yeoman Hey Reservoir and long before Dovestone reservoir was built.

On the early evening of Monday 2nd April 1832, Tom returned from a day on the moors and was relaxing with his friend and pub regular Reuben Platt. They were walking down the road from the pub to Greenfield where Tom was to buy some groceries and Reuben going to his home. Just after they set off they met Bill on his way to the pub and Tom gave his father the door key. Tom and Reuben carried on and some way down they met three men resting at the side of the road. One of the men asked them, in an Irish accent, how long was it to Holmfirth to which they replied about eight miles. Tom said to Reuben that he was uneasy about these men and was worried about his father being on his own at the pub. After reaching Greenfield the two men parted and, after getting his groceries, Tom returned to go back to the Moor Cock. After this, nothing was really known. 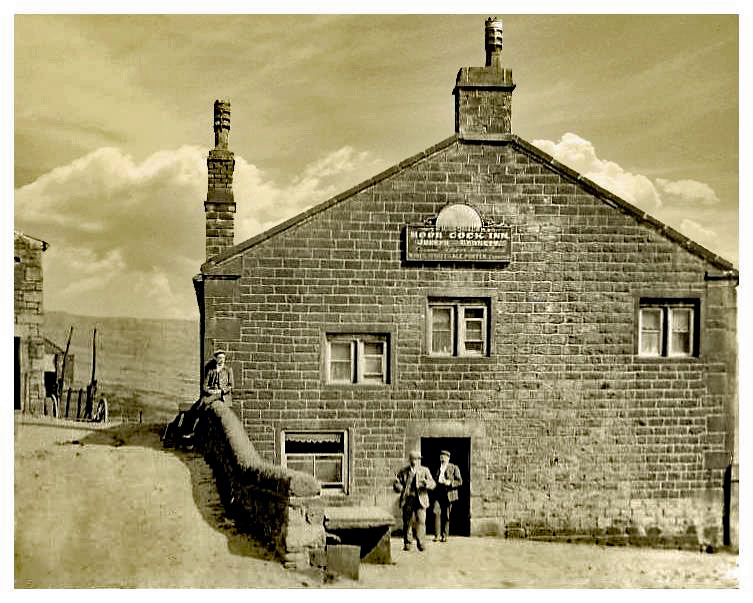 On Tuesday morning, Bill’s granddaughter, Amelia, was sent to the pub to fetch some yeast from her grandfather. On arriving at the pub she saw somebody she could not recognise (Tom) lying in a pool of blood on the floor. She ran upstairs to find her grandfather lying on a bed also soaked in blood. Running to the nearest house at Binn Green (since demolished) about half-a-mile away, where she told the neighbour, James Whitehead who dashed to the scene and sent for a surgeon Mr Higginbottom, who eventually arrived from Uppermill and this is what he found according to a newspaper report.

“Thomas Bradbury was still on the floor, for such was the terror created by the spectacle, that those who had before arrived, were incapable of affording him any assistance. He was lying on his face in a pool of blood, with which his clothes were soaked; his head and face appeared to be a mass of clotted gore. Though apparently unconscious he made frequent attempts to rise from the floor, but each time sunk again into the pool of blood in which he had been lying. At this time pulsation had ceased at the wrist, and he was in fact,  struggling in the agonies of death. In the chamber ( bedroom) was the old man, who, from the marks on the floor and the staircase, appeared to have waded through the blood in his stockings, and made his way upstairs to bed. He was insensible and talking incoherently. There was a deep cut to the left side of the head down to the parietal bone, which was considerably depressed. the fingers on the left hand were cut to pieces; the wrist and elbow of the left arm were cut and mangled in a shocking manner, the muscle being cut through to the bone, which was broken to pieces; and the body from head to foot was covered in bruises”.

Tom who they knew was beyond help was taken to bed and was found to have sixteen wounds to the head, two of which had fractured his skull, and bruises all over his body, he died before they could finish dressing his wounds., the old man died in the early hours of the following morning. 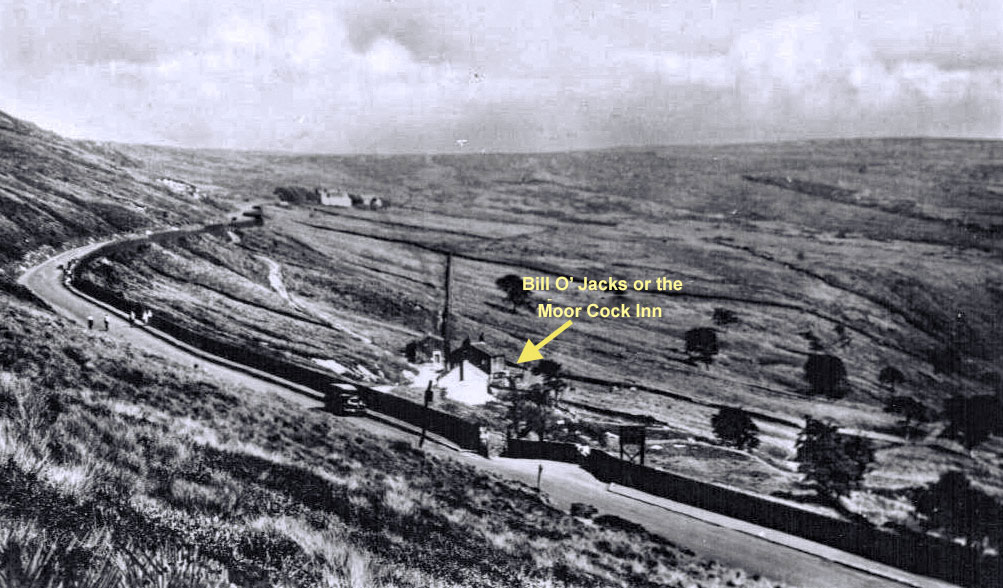 Nobody was ever arrested for the murders and it remains a mystery to this day – although there are many theories on the Internet and in books.

The Moor Cock was demolished in July 1937 and all that remains is a cellar which is often used as a sheep shelter. The plantation around that site is named as the Bill O’ Jacks Plantation on maps. 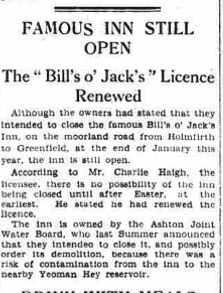 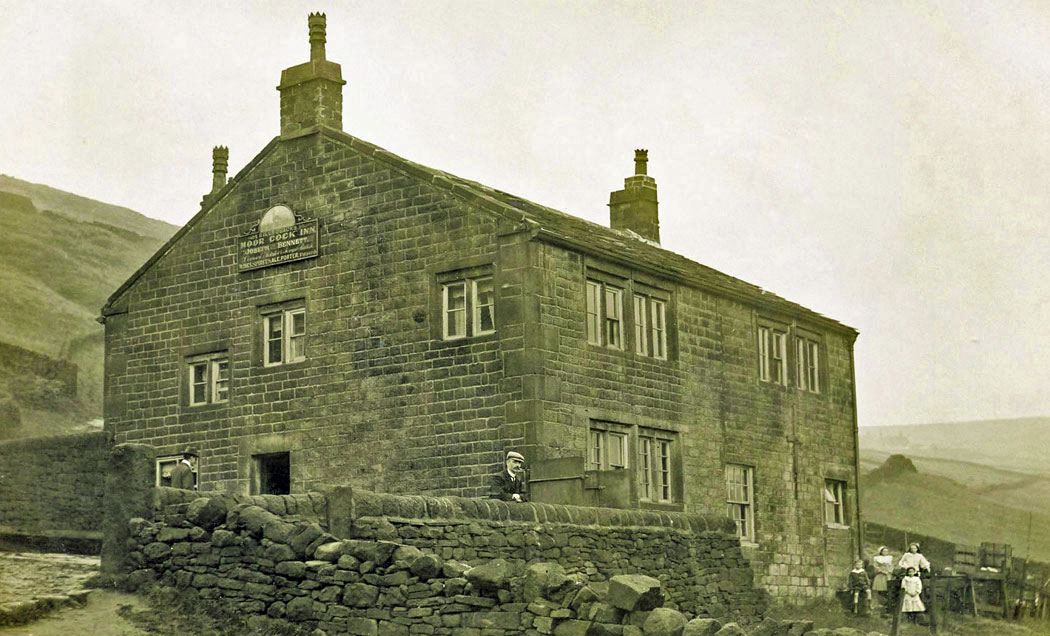 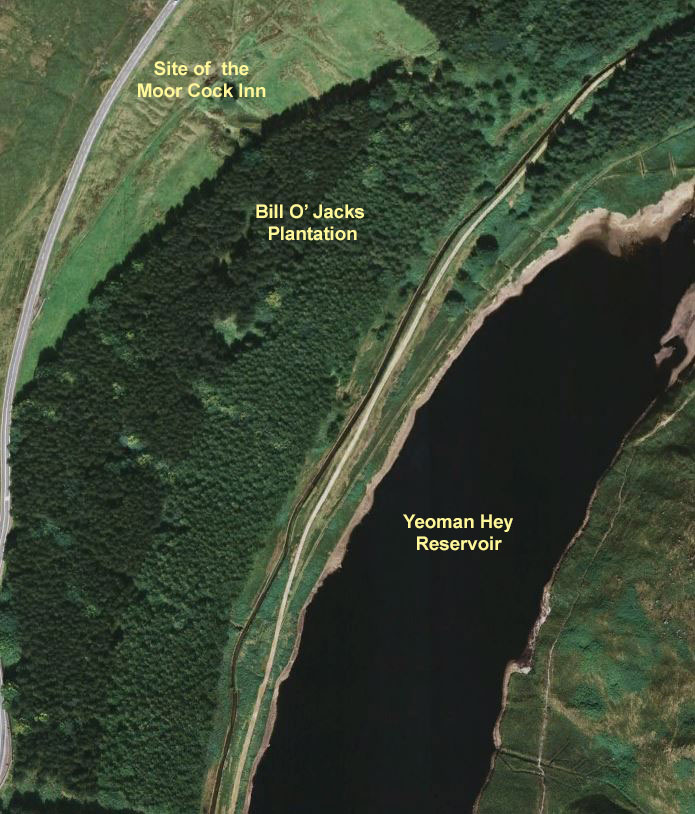