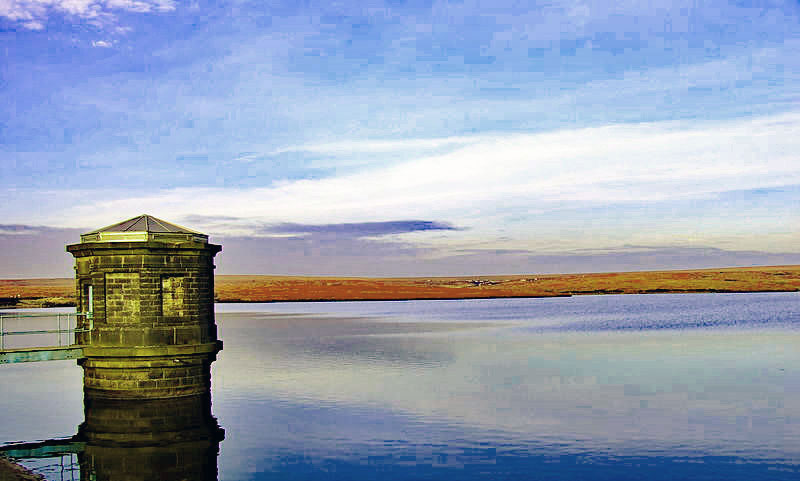 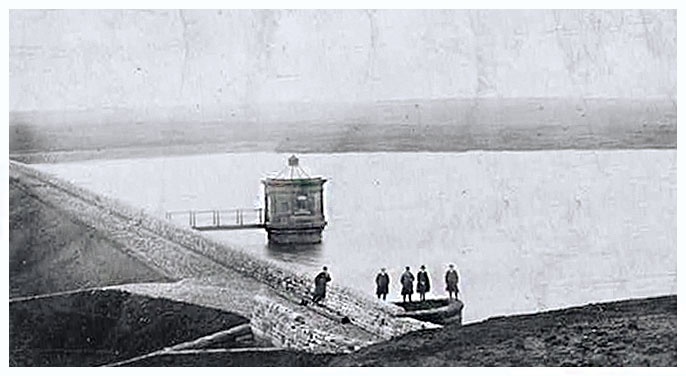 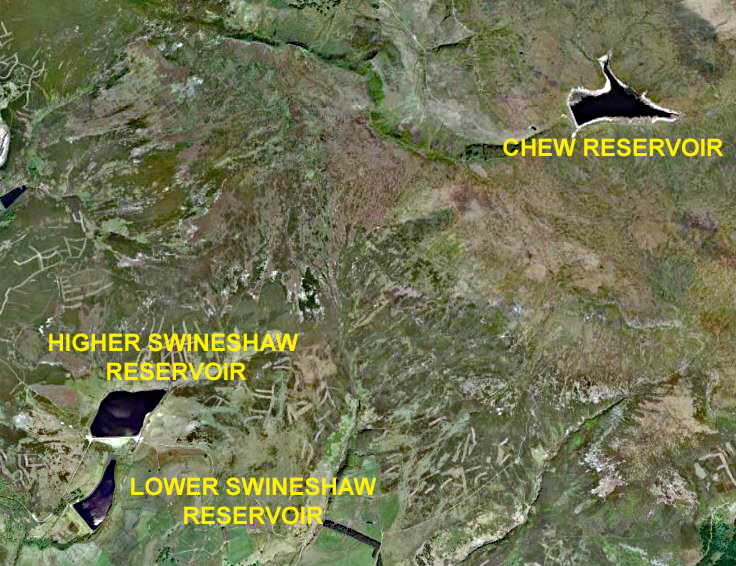 The purpose of Chew Reservoir was to supply the compensation water for the Greenfield and Chew Valley rivers which was required under a government Act in the 1870s. This would leave a better (cleaner) supply from the Yeoman Hey and Greenfield reservoirs to be used directly into the main drinking water supply. 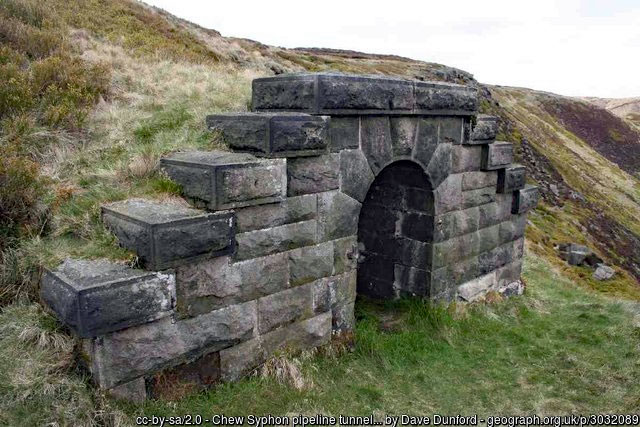 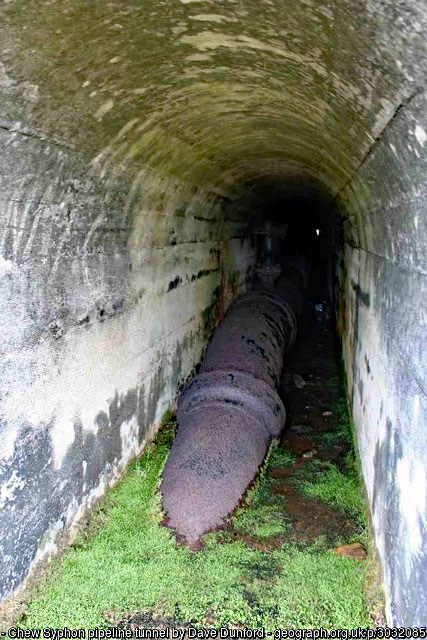 The syphon pipe looking towards Swineshaw Reservoir. It is 631 yards (561 metres) long and markers were placed across the moor to guide the two teams of miners at each end.  — © Dave Dunford 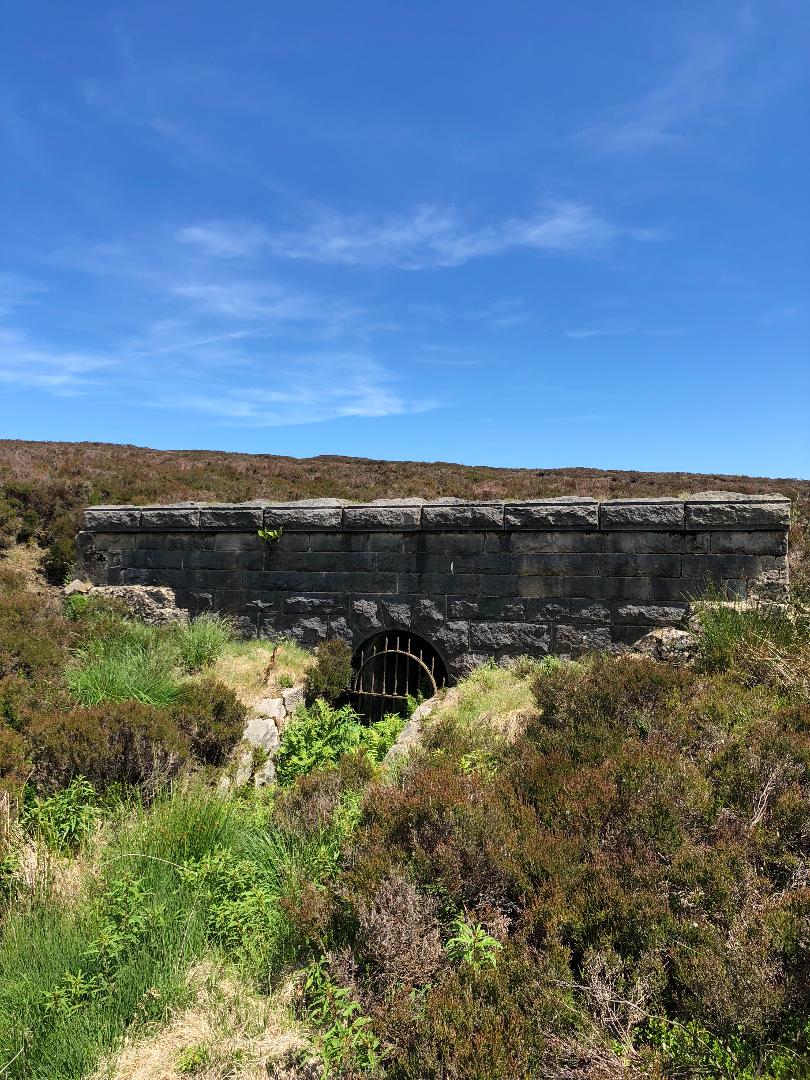 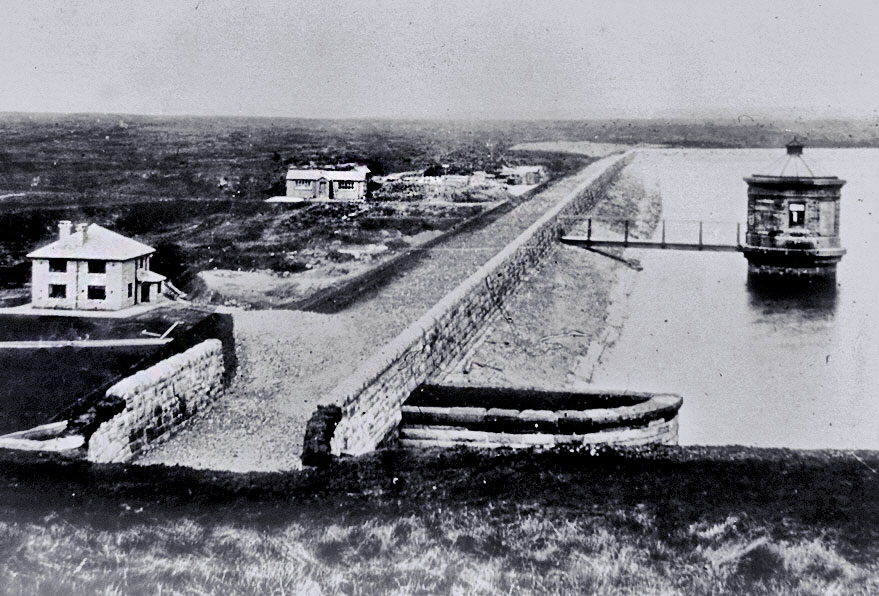 The first operations were to remove the peat from the area of the embankment and create a trench. This was done and went down to 142′ 6″ (43.5 metres) and 10 feet (3 metres) wide. It was paramount to dig deep enough so the water could not escape through any fissures. This was deeper than anticipated and caused a delay in the main task. The trench was eventually filled with concrete and puddle clay – see sketch of the embankment.

Stone was quarried near to the reservoir and crushed on site to provide aggregate or dressed stone for use in building the slipway and the valve tower. Some of the dressed stone was also used later to build the house for the Reservoir Keeper. The works progressed steadily but were delayed at times by severe winter weather, a cement shortage in 1908 and a coal strike in 1912.  Even the grouse shooting season delayed work as no blasting was allowed during that time.

In July 1909, the number of men working on the scheme reached a peak at 550 but varied at times depending on weather and works to be done. And it was not only at the top of the operation but many pipes and two weirs had to be built lower down.

On the 2nd December 1912, the valves were closed for the first time and the reservoir began to fill up. It was full by February 1913 but leakages were observed around the edges of the trench and despite efforts to stop these by pouring cement grout down the boreholes, it didn’t solve the problem. The trench was eventually extended by 380 feet (129 metres) and the reservoir was refilled in November 1913 and was full again by January 1914 – without any leaks. 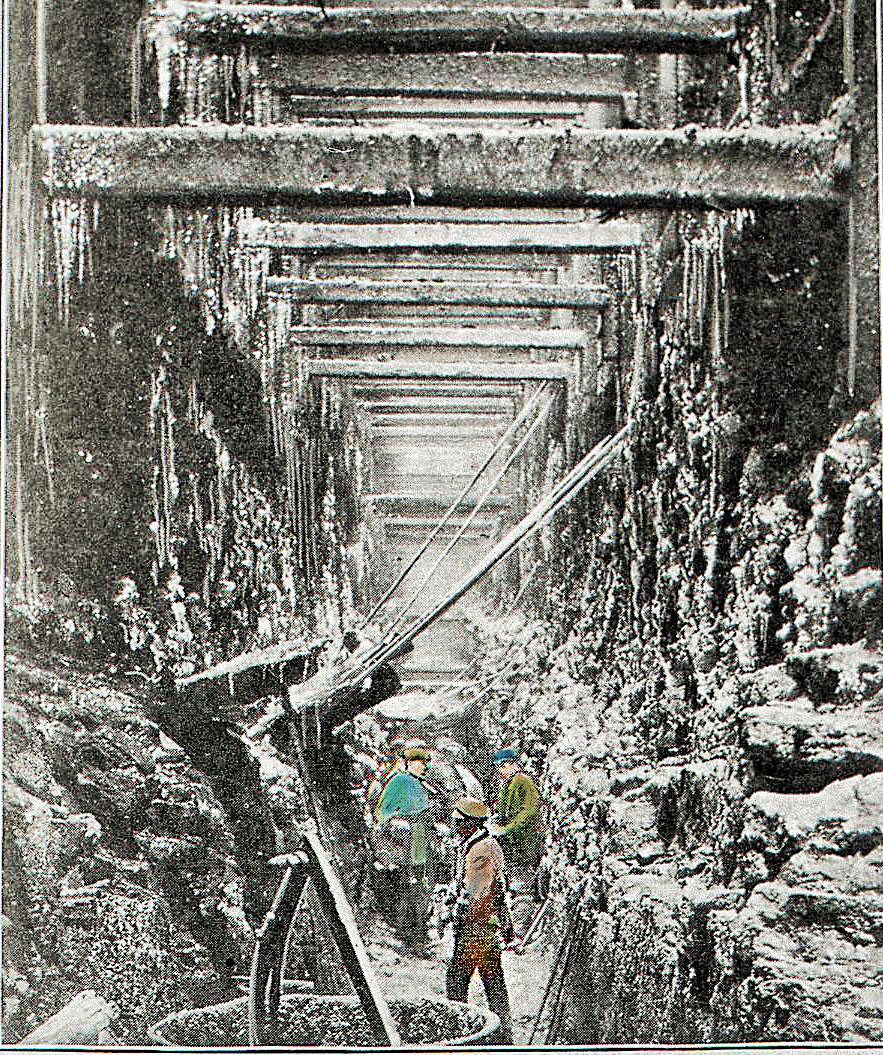 The construction of the reservoir keeper’s house in May 1914 marked almost the ending of the massive scheme and apart from tidying up various legal easements, obtaining a magistrates’ certificate for the new path at the side of the reservoir to Crowden, and removing the railway etc, the task was finally completed. On the 9th September 1914, all the keys were officially handed by the Clerk of Works Mr Nowell. 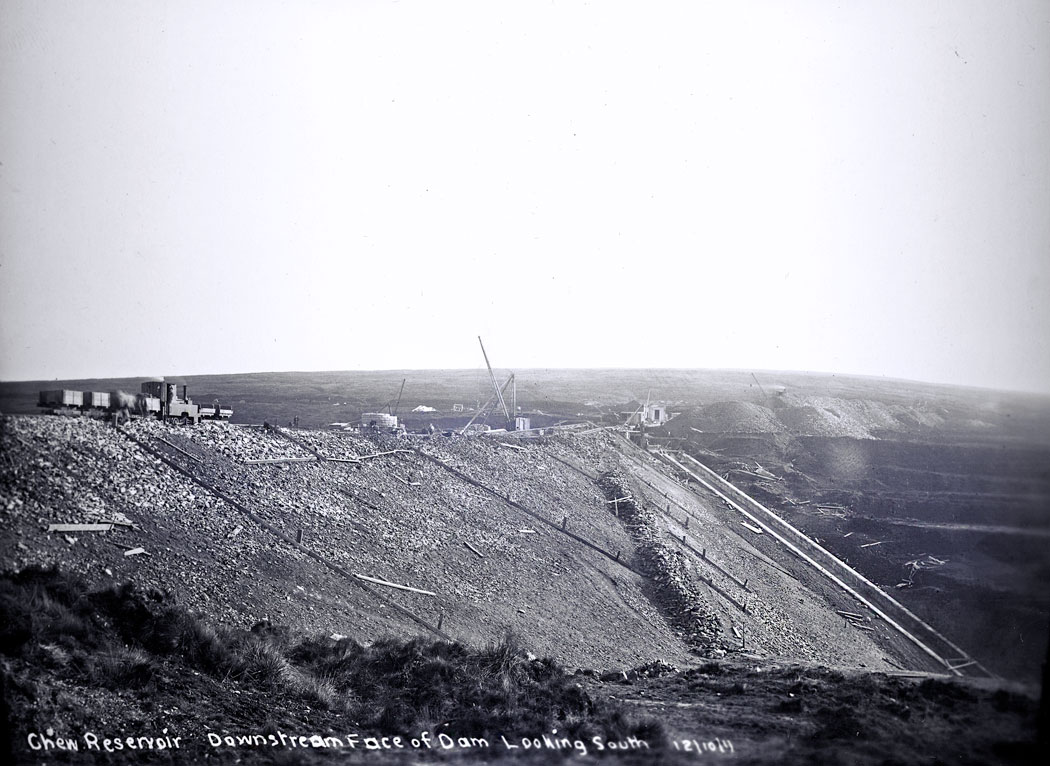 ACCIDENTS: As can be imagined with such a major civil engineering project, there were many accidents to workers during the constructions. Some of these were serious and some fatal. Here are just a few:

22nd April 1908  –  A boiler burst on the steam winch which hauled the trucks up the hillside. Two men were cut and scolded

4th December 1908  –  A man hit an unexploded gelignite cartridge while clearing debris with a pickaxe. He later died in hospital. One other man injured by flying rock.

5th May 1909  –  Man cut his finger in a relatively minor accident but failed to clean the wound properly. Later died from sepsis and pneumonia.

21st August 1909  –  A drive belt on a stone crusher snapped lashing a man across his back, fracturing his spine and fatally wounding him.

24th June 1910  –  Man died at the bottom of a trench after being buried by the contents of a skip of clay which slipped.

13th February 1911  –  Gelignite accidentally exploded injuring two men. Two men injured, one of whom had his nose and eyes blown out. 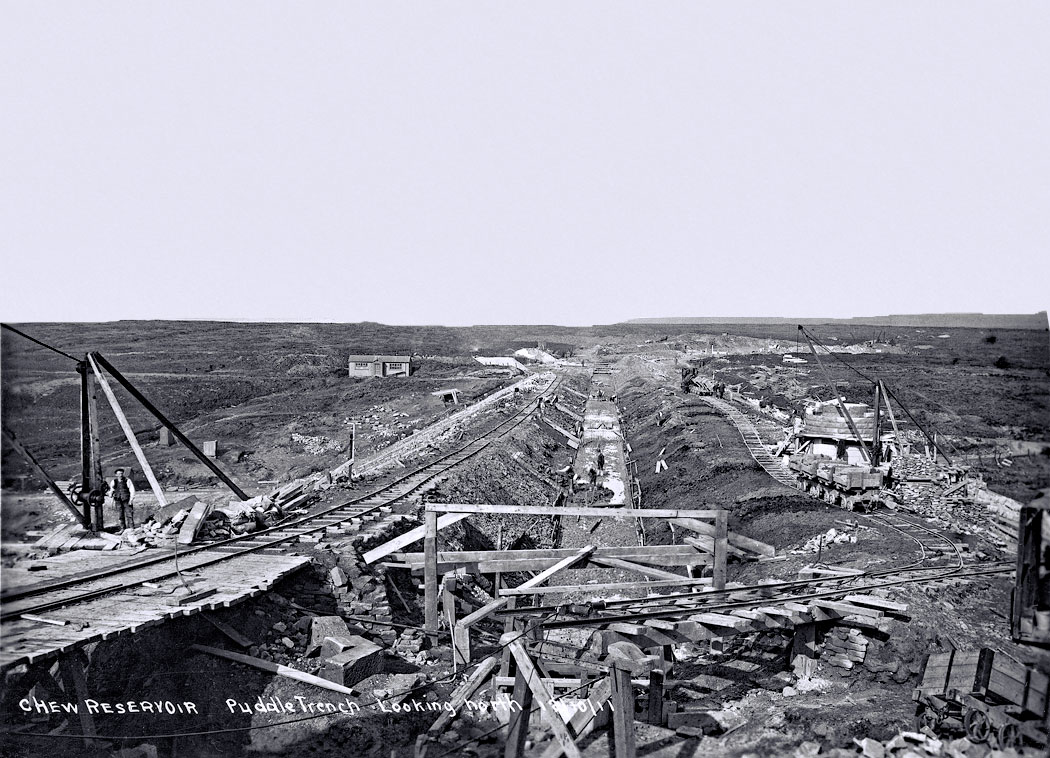